Scientists from the University of California, Santa Barbara (UCSB) investigated on the amount of microplastic emissions shed by domestic laundry throughout the last decades. The microfibres shed by synthetic clothing is not negligible!

Microplastics are a ubiquitous topic. The small plastic particles are nowadays being found in oceans, rivers and lakes as well as in the terrestrial environment. There they threaten biodiversity and organisms native to the ecosystem - including us humans.  We ingest them both through the air and through our food. While the exact health consequences are yet unknown, recent studies suggest that the accumulation of plastic in the lungs can cause inflammation. Read more about the health effects of microplastics here.
According to the National Ocean Service (NOAA), microplastics are plastic particles smaller than 5 mm. These are found for exfoliation purposes in cosmetic products such as body wash and toothpaste (read more on "Oceanservice") as well as in coatings of fertilizers (see fertilizerseurope). However, microplastics also enter the environment through large plastic items as they deteriorate over time. 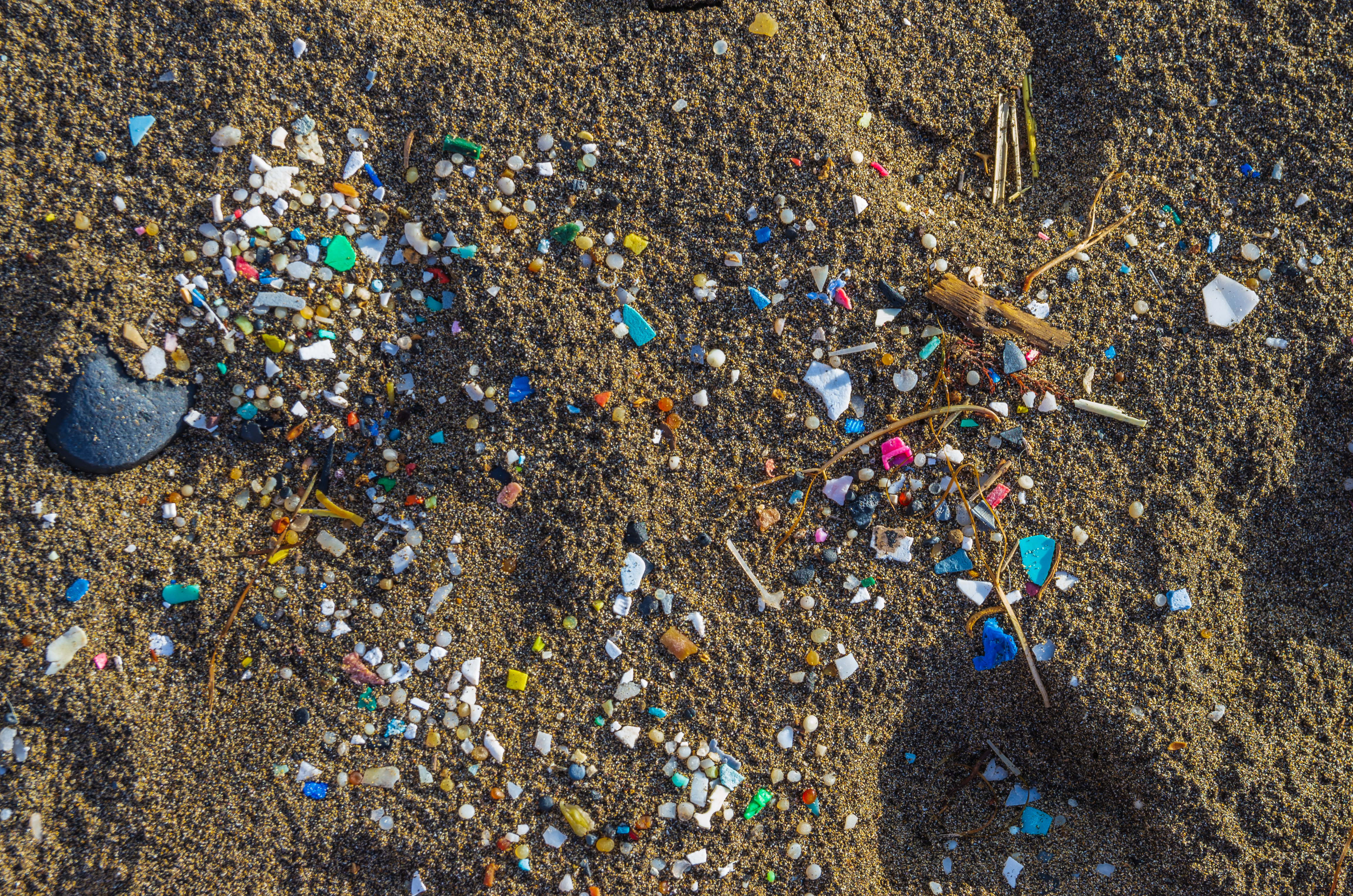 The plastic industry has boomed in recent decades and the handling of the waste it produces is still controversial.
However, microplastic particles do not only enter the environment through careless littering, but also through wastewater (e.g. clothing fibers).
According to research by scientists at the University of California, Santa Barbara (UCSB), the amount of microplastics in the terrestrial environment is now even higher than that in waterbodies. An enormous amount of about 176.500 tons is introduced into the environment each year (read full article here).
One of the main reasons for this is the treatment of wastewater. Fibers filtered out by sewage treatment plants are mixed with sewage sludge in the next step and then distributed on agricultural land. Alternatively, they are found buried in landfills (check BBC).
The plastic fibers are released from polyester and nylon-containing clothing when washed. Thus, through our clothing consumption and handling, we also have a responsibility for the accumulation of microplastics in nature that should not be underestimated.
A UCSB study investigated exactly how high this contribution is. The researchers involved wanted to find out where the synthetic microfibers ubiquitous in the environment come from. To do so, they examined the production and use of plastic clothing around the world over the past 65 years.
About 14% of global plastic is used to produce synthetic fibers, with the majority used in the clothing industry. In recent decades, the sales and therefore the production of clothes increased, while the period of use decreased to an average of 5 years. That is why nowadays we speak of "fast fashion". The amount of clothes in use has increased since 1950 from 100,000 tons to 196 million tons in 2016.  China alone has 76 million of them, accounting for 40% of the synthetic clothing used globally. However, the highest per capita levels are found in North America, where everyone uses an average of 62 kg of synthetic clothes.  The global average has risen from 8 kg to 26 kg. But even higher is the increase in microfibers entering the environment. This is also due to economic and technological development, which has led to increased use of washing machines and more frequent washing cycles. In total, 5.6 million tons of microfibers have entered the environment globally as a result. However, half of the emissions can be traced back to just the last decade. 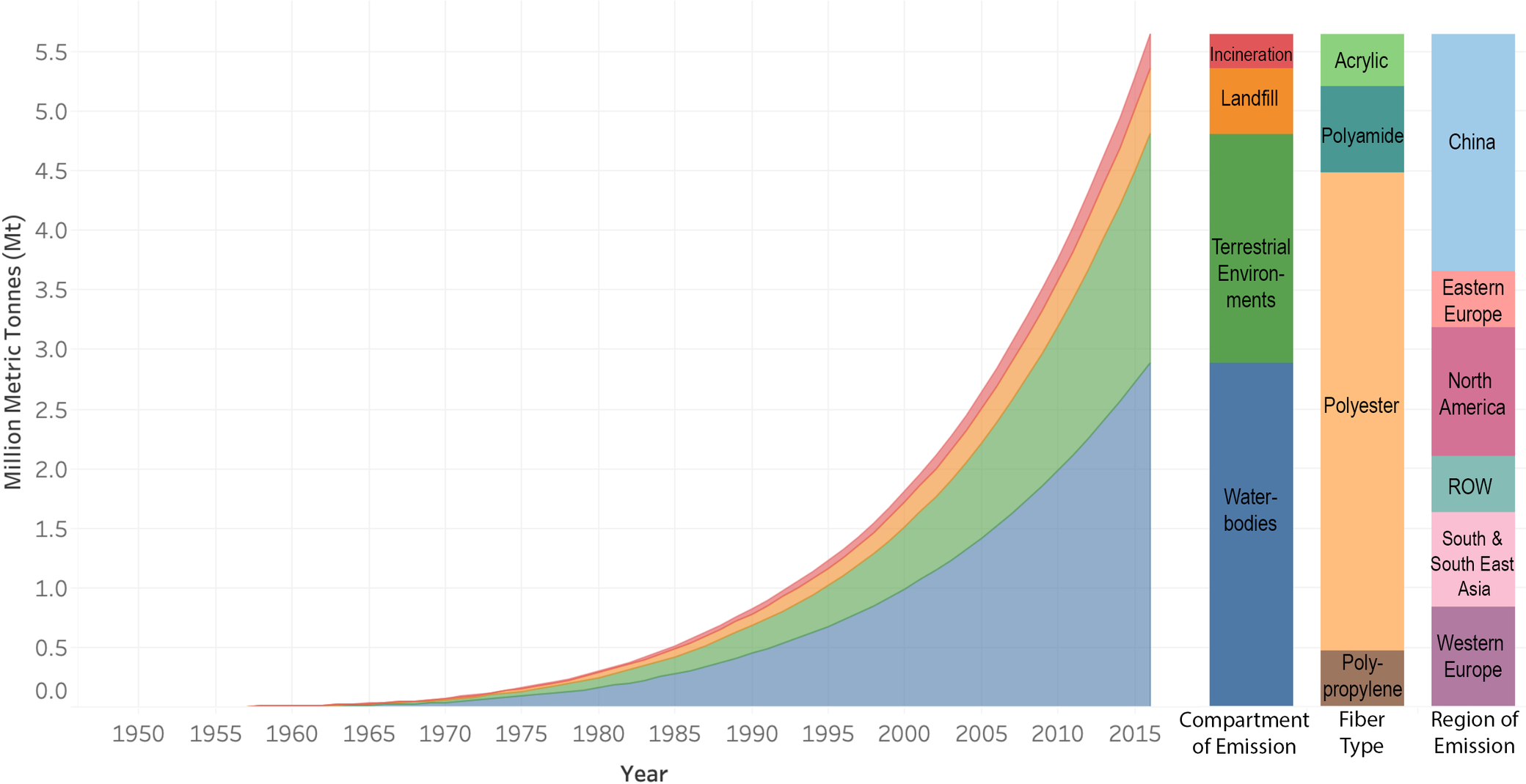 Using the estimated values, it was calculated that probably 0.34 kg of synthetic fiber particles are dissolved per ton of washed synthetic fabrics. In 2016, the USA and Western Europe took third and fourth place in the ranking of synthetic fibers released by washing (see graphic below). 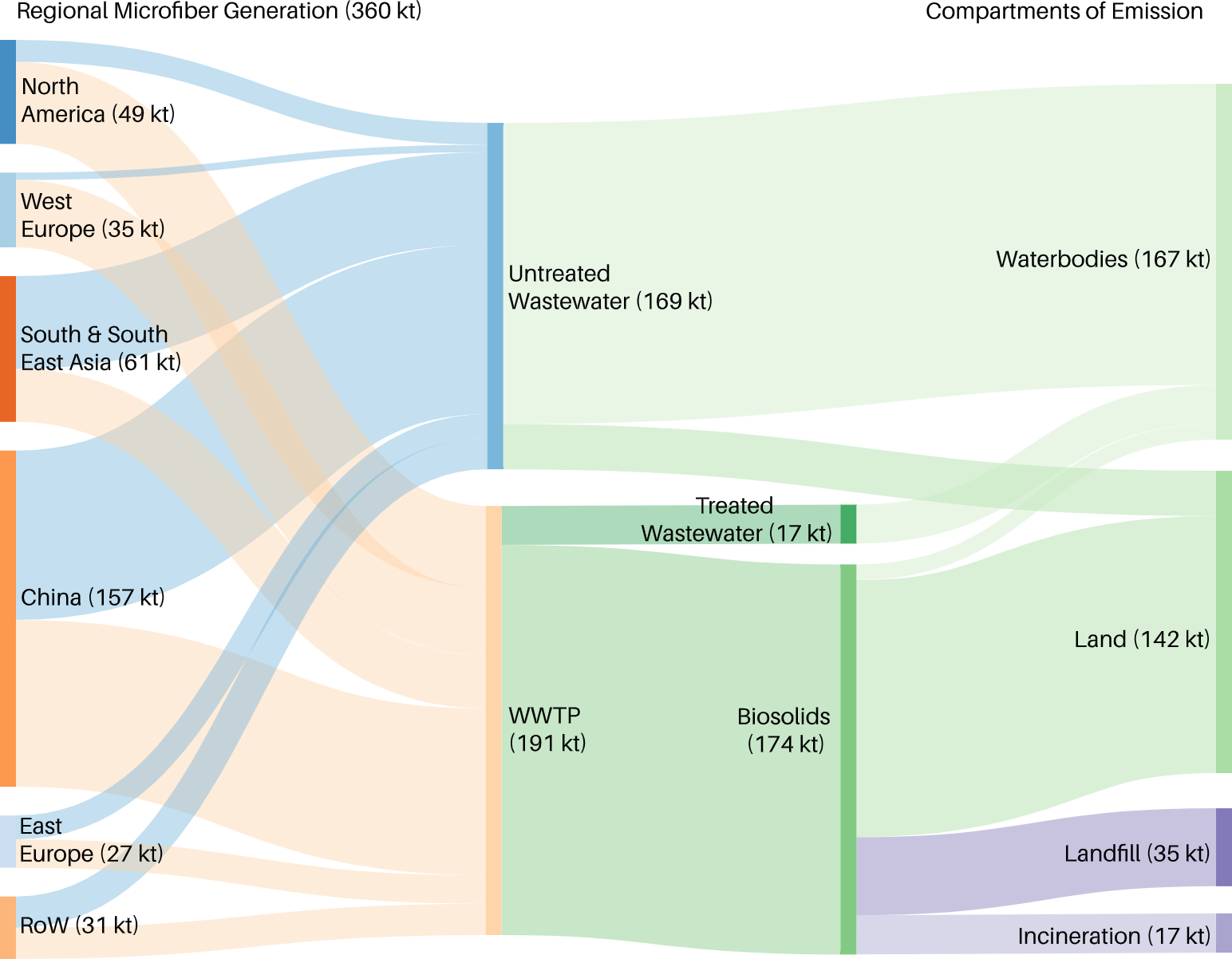 But the majority of these particles end up in wastewater treatment plants (WWTP) and from there mostly as sewage sludge (biosolids) on the fields.  Thus, via the wastewater pathway, a large majority of plastic particles ultimately end up in the terrestrial environment and then later on our plates.

WHAT CAN WE DO?
The fact that synthetic garments shed plastic particles is probably one of the most unknown global environmental problems. The daily amount of microplastic entering the ocean would be equivalent to about 50,000 plastic bags for the city of Berlin. The non-profit organization "STOP! Microwaste" therefore provides recommendations for "greener" washing. In addition to the advice to pay attention to the material of new clothes and to avoid fabrics containing plastic as much as possible, or, if necessary, to air them out more often, instead of washing them, it also helps to observe the following rules:

1. Avoid/reduce friction!
Use a low spinning speed and do not wash with hard objects (e.g. shoes) and stiff fabrics (jeans).
2. Use shorter and colder wash cycles (prevents fiber breakage)
3. Use (little) pH-neutral detergent without bleach (preferably without abrasive materials)!

In addition, commercial drugstores have recently begun selling laundry bags that are designed to filter out plastic fibers from the washing cycle. After several washes, users can remove these by hand and dispose of them in the plastic waste. This means that fewer microplastics, as well as toxins contained in the plastic, end up in the water, which later enter the ecosystem through the water cycle and ultimately end up on our plates as a result.
Of course, the responsibility for this issue does not lie 100 percent with the citizens. In addition, advanced sludge treatment technologies can help filter out microfibers in the future before they end up in the field. If added on agricultural land, these can limit physical soil functions, microorganism activity, and affect plant health. However, as the implementation of these technologies is currently complicated and takes time, the laundry bags are a good way to directly address plastic fiber pollution.
We conducted self-tests with the laundry bag, but after a few washes, we have not yet detected significant amounts of plastic fiber. If you have experience with the laundry bag or other measures to prevent microplastic fiber emissions, please share them with us! (Contact: meschnark@ia-gmbh.de)

More news:
This used to be a municipal rubbish dump - ‘El Palmetum’ in Santa Cruz Tenerife

Carsten Spohn passed away at the age of 53

What a Waste 2.0 - A Global Snapshot of Solid Waste Management to 2050

Paper and board recycling in 2020: Overview of world statistics