A new system for waste collection and separation was implemented in Istanbul which should support people in need, clean the streets and gain value out of recyclable materials. 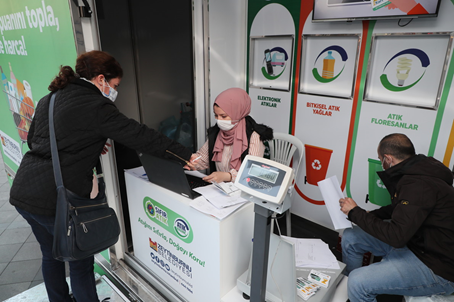 In the municipality of Zeytinburnu (Istanbul), the "Waste Recovery Project” was launched to create Zero Waste Neighbourhoods with the aim of reintroducing local recyclable materials to the economy. The waste control aims to fulfill sustainable development goals, especially number 11 - Sustainable Cities and Communities. It aims to secure a clean and livable world for future generations and further indirectly enhances the income of the locals. After having organized already several Waste Management Projects, the district now received the title of being the first "Zero Waste District”. 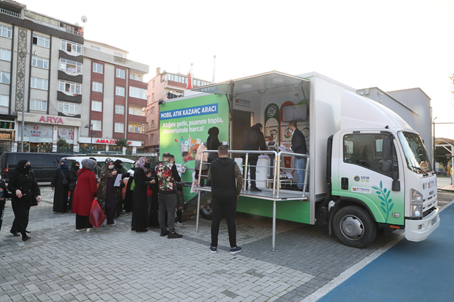 People who want to participate in the project receive magnetic cards. These are produced directly in the so called "Waste Gain Mobile Vehicle”. Participants earn points by delivering sorted waste fractions to the Mobile Waste Recovery Vehicle, which tours daily through the streets of Zeytinburnu or to waste collection areas located in the Seyitnizam and Sümer neighborhoods. Valuable fractions are paper, plastic, metal, glass packaging waste, vegetable waste oils, waste batteries, electrical waste and electronic equipment and waste fluorescent tubes.
Depending upon the weight and type of waste, an adequate number of points will be loaded on the card. The card holders additionally receive an update via SMS regarding their current balance. With the accumulated points, people can pay their groceries in contracted markets. Further, with future applications it shall be possible to send food aid to those in need.
The call "Bring your waste, collect your points, spend it in your shopping" received more attention than expected from the residents of the district. The project has been running since the end of 2020 and already after one month the Mobile Waste Recovery Vehicle transformed 24 tons of waste. In return people gained 16,500 shopping points.
In this way both the economy and the environment won. With the recycling of waste, 231 trees were saved from being cut down, 87, 811 kilowatts of electricity, 360, 155 liters of water, 14, 139 liters of gasoline and 4 tons of raw materials were saved; 54 cubic meters of landfill was left empty, and 670 kilograms of environmentally friendly biogas was obtained from recycling.
While inflation and unemployment are rising, the project gives hope to the people. So far, households did not separate their garbage at home. In the first two months 70 tons of garbage were collected and people received 40.000 Turkish Lira, equivalent to about 4400 Euro. The pandemic has enhanced the waste collection motivation in the population as people´s financial situation has worsened since the life in the country has become more expensive due to the economic state. They more than ever really need the extra income gained through the points.
The urban administration finances the project by selling the waste previously collected by poor people in the streets. Consequently, the pushcart gatherers (poor people living in the streets), who earlier collected recyclable material to resell it, have now lost their source of income.
Referring to that problem, the leader of the environmental agency of the municipality explains that the consciousness in the population for an environmental-friendly treatment of waste can only increase if everybody participates. 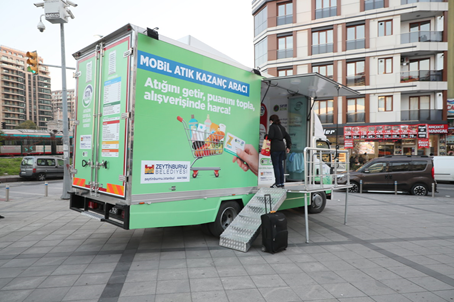 Background
As Turkey is lacking resources, the country buys them from foreign countries like Germany. The country is one of the biggest importers of German plastic, but recently the discussion started to restrict the amount. In the year 2019, 67,000 tons of packaging waste arrived from Germany, but only a part of it can be recycled. Bales are often filled with dirty trash which is non-recyclable. Those are then burned on the bank of rivers. In the last years more than 100 deposition sites were set into flames, the cause of the fires remain unexplained. Further, the grinding and milling processes in the recycling industry of Turkey do not reach the environmental standards. The water used for the washing of the plastic goes to sewage plants or directly into the nearby water bodies. As the purification plants lack an adequate technique to filter plastic particles, at the end all the microplastic end up in the Mediterranean Sea.
As Germany has much better equipment to process the recycled material, thus preventing microplastic from entering the environment, it would be recommendable to recycle it there.
The environmental ministry in Turkey now demands that a minimum of half of the recyclable garbage should come from Turkey. So far, the infrastructure for waste separation is rather rudimentary, but projects like the "Waste Recovery Project” can enhance the process. Collecting local waste contributes to cleaner cities and, in addition, communities can make sure that the plastic, which is to be recycled, is clean and usable for further processing. This hopefully will lead to decreasing landfills and less burning of waste.
Details about the project can be found on the following websites (in Turkish):
http://www.zeytinburnu.istanbul/Haberler/Atigini-Getiren-Alisveris-Puanini-Kapti
http://www.zeytinburnu.istanbul/Atik-Kazanc-Projesi
Contact
More case studies:
This used to be a municipal rubbish dump - ‘El Palmetum’ in Santa Cruz Tenerife